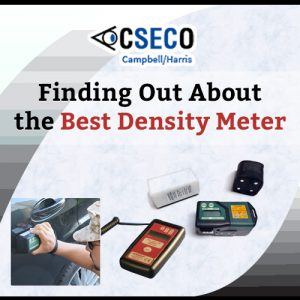 Campbell/Harris Security Equipment Company (CSECO) supplies the latest innovative contraband detection tools that consistently lead the market. These tools include the Buster Density Meter, CSECO’s first and flagship product. For over 35 years, the Buster has been the “gold standard” for density meters and contraband detection by local and domestic law enforcement agencies in the US and abroad.

Tracking someone who is suspected of illegally transporting narcotics and other contraband items has not always been easy. However, the Buster reduces much of the time, effort and strain of inspecting vehicles and spaces for hidden contraband. With its speed and accuracy, the Buster can pinpoint the exact location of the contraband by scanning the object (like a car seat or a gas tank) in which the contraband is stuffed or stashed. The Buster can pick up signs of hidden contraband by determining the density level of that object. Once it detects the unusually high-density levels – the indication that contraband is most likely to be hidden – the Buster alerts the user through its visual and audible readouts.

The Buster still uses the same technology – the low-intensity gamma radiation emitter and scintillation detector – to quickly scan vehicles and residences for hidden contraband. It is designed to allow the user to determine whether a suspect vehicle tests positive for contraband in less than five minutes and scan an average room in less than ten minutes.

Unlike other detectors that use millimeter wave, radio wave, ultraviolet wave or microwave technologies, the Buster can identify concealed items through a variety of materials: wood, reinforced plastic, leather, metal, and many others. You don’t have to tear down or dismantle parts of the item you’re inspecting, let the Buster confirm the presence of hidden contraband so you know for sure.

The Buster K910B was the first version, released in the mid-1980s. Many years later, CSECO added the RAD-Aware, the radiation detecting feature which allows first responders to establish safety parameters in the event of a dirty bomb detonation or any other radioactive release.

CSECO recently updated and released a newer version of the Buster, the Buster K910G, with improved features. The radioactive source is now 25% smaller than any other density meter and all lead components have been removed from the system. These improvements make the Buster the safest density meter not only for the users, but also for the environment. It also comes with a new two-year warranty.

The Buster is the world’s first density meter for contraband detection. Since it was first introduced, the Buster had been the only density meter of its kind for 25 years until competitors came in and began to release their own versions. Nevertheless, the Buster has maintained its position as the best and the most trusted density meter not only in the US, but also in several countries worldwide.

For more information about the Buster Density Meter, click here.