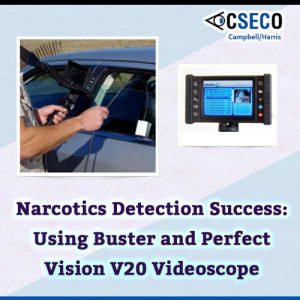 Narcotics detection is a job that requires competent and highly trained people, as well as dependable specialized tools to assist them. When you have them both, the chances of detecting hidden narcotics will be more successful.

Narcotics detection is also a risky business when you do not have the right tools. When looking for narcotics detection equipment, make sure that they guarantee sure and accurate results. They should be safe to use, too.

Campbell/Harris Security Equipment Company (CSECO) is the trusted name when it comes to top-of-the-line narcotics detection equipment. The Buster density meter is CSECO’s first and still the best-known in its lineup of narcotics and contraband detection equipment. However, the newer tools, such as the Perfect Vision V20 Videoscope, has gained praise for its functionality and safety.

While the Buster density meter and the Perfect Vision V20 are efficient on their own, when you use them together, they make a formidable pair in detecting hidden narcotics and other contraband items.

The Buster has been a success since it first launched as Buster K910B. It was designed and developed by CSECO founder Patrick Campbell, with direct input from no less than Customs and Border Protection (CBP) agents. The CBP tested the prototype on the field to ensure its efficiency in detecting hidden items.

The Buster uses low-intensity gamma radiation and scintillation detector to quickly scan vehicles and structures for hidden contraband. The Buster helps the user determine whether a suspect vehicle has hidden contraband within five minutes or an average-size room within ten minutes.

The Buster sends an alert to the user once it detects an unusual level of density of an object which it scans. When the object’s density is unusually higher (or unusually lower) than normal, it means that the object may have been tampered – a likely indication that it carries narcotics or other contraband inside. The Buster has both audible and visual alerts to notify the user of the presence of the contraband inside an object.

Other contraband detection tools that use microwaves, millimeter-waves, radio-waves, or ultra-violet waves have limited scanning and detecting capabilities. The Buster, on the other hand, can detect a variety of hidden items – narcotics and other illegal substances, cash, jewelry, weapons, and explosives. It has the new RAD-Aware feature which enables officers to detect radiation, such as dirty bombs. It can scan on a variety of materials such as wood, metal, reinforced plastic, even dirt.

The latest iteration of the Buster, the Buster K910G, is now made safer than ever. It emits at least 25% less radiation than rival density meters. Also, it does not contain any lead components.

It has a five-inch, high-resolution LCD with a 3.5x continuous digital zoom. The very design of this videoscope allows the user to have a clearer view of what he’s inspecting (inside a vehicle’s gas tank, for instance) without losing visibility to his immediate surroundings. Thus, it reduces eye fatigue.

The Perfect Vision V20 Videoscope’s push-button and video capture system stores up to 8,000 photos, or up to six hours of video evidence without the need for camera attachments, allowing the user to review the images on the display, on the spot.

The Perfect Vision V20 Videoscope is the first Videoscope to receive a UL safety certification. It means that it is safe for use in gas and fuel tanks, without causing dangerous sparks or ignition.

Use the Buster density meter for detecting the possible presence of narcotics and contraband inside an object, and then the Perfect Vision V20 Videoscope to help you confirm the items hidden in that object. When you use these two excellent tools, they will bring a greater chance of success in your narcotics detection.