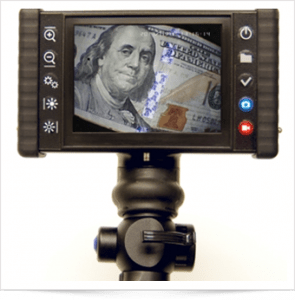 Campbell/Harris Security Equipment Company (CSECO) is the home of the most renowned contraband detection tools in the market. These include the Buster Density Meter, Perfect Vision V20 Videoscope, as well as the CT-40 Contraband Team Detection Kit.

The Buster K910B Density Meter is CSECO’s maiden product, and also the world’s first-ever contraband detecting density meter. Since its launch, it had been widely used by law enforcement agencies in the U.S. with the task of getting illegal drugs, narcotics, and smuggling off the streets. It was hailed as the “gold standard” of density meters. But CSECO has made it even better, with the release of the upgraded version, the Buster K910G!

The K910G beams a low-intensity gamma radiation and scintillation detector, just like the K910B. This technology facilitates scanning several different surfaces like metal, wood, reinforced plastic, concrete, even dirt. It also enables the interdiction officers to detect a wide range of concealed contraband from narcotics to cash to explosives.

The Buster K910G is fast as well as accurate, just like its predecessor — it picks up four readings per second and can locate hidden objects by penetrating into the suspected objects as deep as six inches. The features allow interdiction officers to move the Buster quickly to the next area while maintaining accurate readings.

The Buster K910G also has the ability to detect abnormal amounts of radioactivity through its RAD-Aware technology. This enables the inspectors to set up safety zones to keep other people out of potentially dangerous radioactive leaks.

The Buster K910G has newer features. It includes a 7.5 micro curie Barium 133 source, which is at least 25% less than the competition. It also removed all lead-based components that were present in the K910B. This makes the K910G absolutely safe not just for the user, but also for the environment, as well.

The Perfect Vision V20 Videoscope Inspection System is CSECO’s newest visual inspection tool designed to outperform the leading fiberscopes on the market. It has a 2mx6mm tungsten-coated shaft which can be inserted into areas that the Buster finds inaccessible. It comes as a one-piece unit, which means there’s no need for bothersome attachments like cables and wires.

It has a large, multi-directional color LCD display with push-button dimming and digital zoom which provides 10 times the resolution than that of the leading fiberscopes. This large monitor allows the inspectors to view clearly into the suspected area without losing visibility of their immediate surroundings. It is built with a high-intensity LED lighting which allows the interdiction officers to use the tool when conducting inspections at night or in darker locations. The Perfect Vision doesn’t have any glass fibers, thus it is less prone to breakage during use.

Many scope manufacturers claim that their tools are safe, but how many of them are certified safe? Not a lot! The Perfect Vision V20 is certified safe by the Underwriters Laboratory (UL), the leading name in product safety. This important certification allows the Perfect Vision V20 Videoscope to be used in risky locations like fuel tanks. Videoscopes and fiberscopes without this certification present risk of producing extremely dangerous electrical currents. This isn’t a problem for the V20!

The CT-40 Contraband Team Detection Kit should be the kit that every interdiction officer needs. It is the updated version of the CT-30 Contraband Team Detection Kit, only with the newer tools like the Buster K910G and the Perfect Vision V20 Videoscope, which replaces the FV-Series Articulated Fiberscope and digital camera. The kit also contains the PN – Series Inspection Probe Kit, the Leica Laser Range Meter, and the PM – 10 Extension Inspection Mirror with High-Intensity Flashlight. They are encased by a sturdy, long-lasting and shock-resistant carrying case, equipped with wheels. Check out the link for more details of this wonderful contraband detection tools kit: http://cseco.com/Products/CT40.aspx.